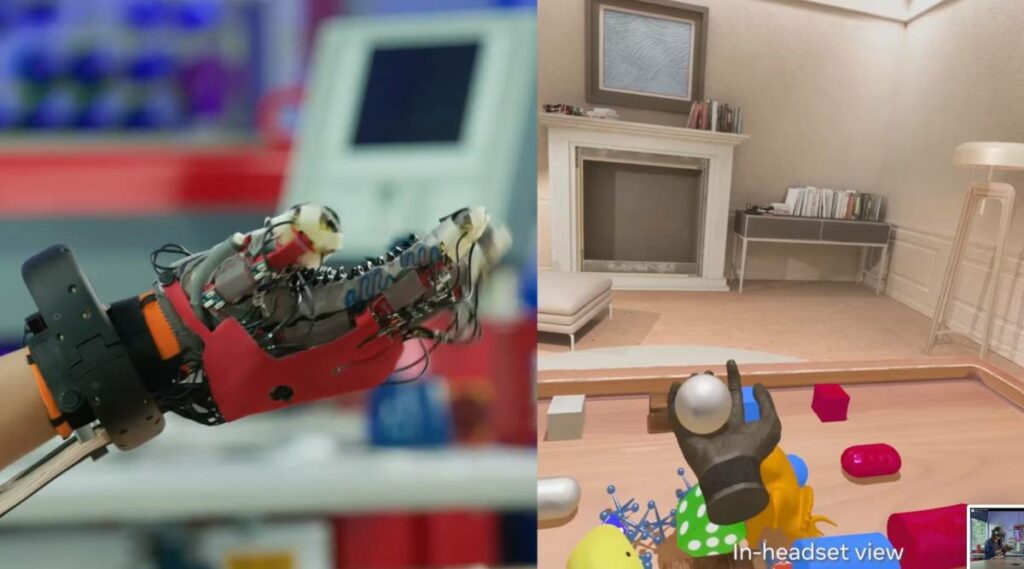 Slip-on vibrating gloves that allow you to feel the virtual environment have long been a part of our sci-fi vision of VR. For the past seven years, Meta’s research arm has been working on haptic gloves, but the gloves that have been developed are still not portable. But it’s possible that they will be in the future.

Sean Keller, the company’s Reality Labs research director, and Michael Abrash, the company’s chief scientist, gave CNET a rundown of recent advances. They discussed why haptics are so essential to Meta and how all of this ties into the future of AR smart glasses.

Meta’s prototype inflatable-bladder gloves are one step closer to becoming a pair of consumer gloves. However, a closer look at the technology reveals that we won’t see them combined with a replacement to the Quest VR headset for some time.

The most recent glove designs use microfluidics to push air through a number of bladders across the gloves, which is less conceptually complex than filling a pair of gloves with numerous little motors. It’s a strange concept, like Meta’s Dune stillsuit for your hands.

“Literally, we’re changing the stiffness of the material,” says Keller. “We have ones that use air to move something across your fingertip up and down, or laterally and inward — that helps you create that shearing force — and ones that are little bladders that create pressure.”

Meta, on the other hand, is convinced that the haptics will be able to perform things that have never been done before. In 2017, Facebook Reality Labs Research experimented with a demo that gave the impression of dropping balls composed of various materials onto your outstretched fingertips.

The marble ball and the squishy foam ball didn’t feel the same as the wooden ball. Hundreds of pressure-applying bladders (pneumatic actuators) and VR visual inputs combine to create the illusion. It wouldn’t operate the same way on a 2D screen, according to Michael Abrash, making this technology unique to AR and VR.

This technology is currently in development in a lab, but Meta’s study suggests that a complete haptics rendering engine is required.

It’s similar to how the DualSense controller for the PlayStation 5 had to find new techniques to create immersive haptics, but on a larger and more intricate scale.

“I’ve got all these bladders and things on my hands, they’ve got tubes. And the next one, I’m going to have 10 times more. It becomes a huge problem from a systems perspective, you can’t solve it without someday building something like microfluidic microprocessors,” says Keller.

Many of the current uses for haptic gloves appear to be simulations of hand-based activities, such as Jenga, thumb wrestling, or picking up objects, based on Meta’s exhibited demo concepts. Many of these concepts are already possible with hand tracking, albeit without the physical input.

Michael Abrash believes that technology will make a significant impact in mimicking virtual tools. Using haptics to type on a keyboard or wield a sculpting tool or brush that isn’t truly there could mean that working in VR becomes less unpleasant.

Of course, for the time being, that would also entail donning large, odd gloves linked to cables and tubes, which would be equally inconvenient.

“The question becomes, how well can the gloves emulate the tools? And I don’t know the answer to that yet,” Abrash says. “A virtual keyboard could move with your hands, so as you’re typing, if you drift around a little, we can still infer what you were meaning to type.”

Abrash does not expect to see haptic gloves worn with smart glasses all of the time; instead, the company is concentrating on electromyography. EMG employs wristbands that detect motor neuron signals and convert them into movements and controls.

Abrash claims that his research department is working on much more distant goals than Meta’s consumer goods team, so don’t expect to see haptic gloves anytime soon. However, he considers much of Meta’s vision to be a work in progress, with haptics and future inputs playing a key role.